I have lived and worked on the Olympic Peninsula in Washington State for many years. It’s a great place to be for many reasons. But the challenges for professionals are a bit different than in the city because of an odd malady I call:

This affliction came to my attention shortly after establishing my design practice. Although I didn’t contract URS myself, I soon noticed symptoms in others.

It begins when business or professional people move from the city to the country. If they have URS, they will unconsciously assume two things: 1) that they are one of the few people ever to have had the brilliant foresight to flee urban blight, and 2) that it will be impossible to get support services of the same quality they were used to getting in the city.

URS will also keep sufferers from finding business services locally because they won’t look. This will continue until a newcomer has been in the country long enough to be on the receiving end of URS. At that point, the dots may connect and the formerly new person will be able to recognize that there are other competent professionals in the community besides themselves.

My first client with URS came to me for a logo. As I was reviewing my portfolio with him, he pointed to one of my examples and said, “I couldn’t possibly get work like that here. I would have to go to Seattle.”

I was dumbfounded. Whose portfolio did he think I was showing? I had just left a design position in Seattle, but apparently when you move to the Olympic Peninsula, all your abilities fall off the ferry into Puget Sound. 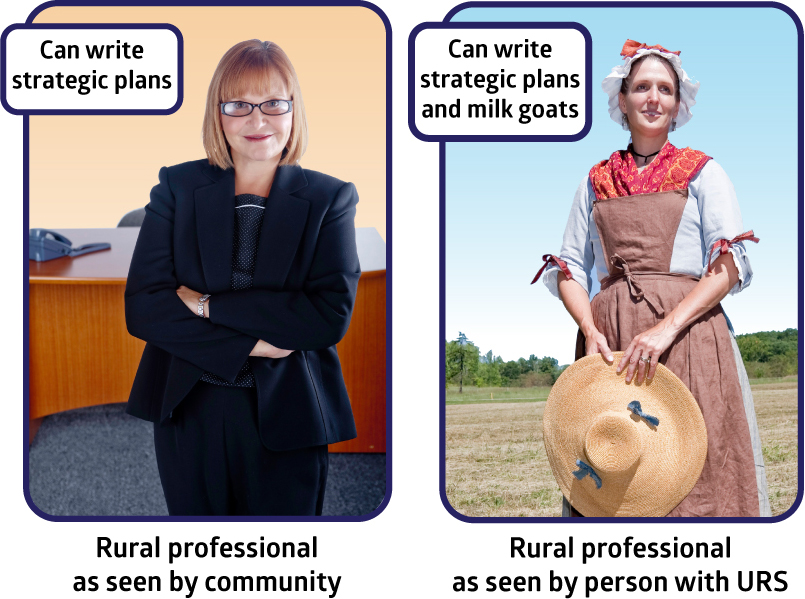 Rural professionals must be hyper-aware of how they present right from the get-go. How you dress, what your online presence and office are like, your business materials, how you answer the phone: everything has to be top-notch because everything sends a message. When it comes to establishing professional credibility, perception is absolutely crucial.

By managing how you present (we’re talking about your branding here), you torpedo those unconscious assumptions before they even gain a toehold. And you are also telling clients to expect to pay you what you’re worth.

One of the worst URS assumptions is that since services in the country must be of less value than those in the city, they should be cheaper.

Do not reinforce this stereotype by assuming that because you live in a small town, you can show up in a sweatshirt and jeans. If you look like you only need $10 an hour to live on, that’s all you’ll get.

The take-away for all professionals no matter where they live: Don’t assume that people will automatically know how great you and your business are. You have to tell them by showcasing your worth in every possible way.